If you are looking for a reliable host to get your new site up and running as fast and as cheap as possible, go with SiteGround. They're offering a 60% discount currently, so you pay $3.95 per month!

Internet businesses seem to flock to DreamHost… and the funny thing is that I seriously ask myself why. To start with, support is less than decent, the control panel is sub par and the uptime is downright lousy.

But what tops the cake is the completely ridiculous and unprofessional patchwork when DreamHost attempted to keep to one of its many over-promises (more about that later).

I am sure a lot of backlashes would follow after this review is published, especially from those ardent DreamHost fans. But it is my job to present an honest opinion. So, fanboys, no apologies….

Now that I am in the mood, let us get straight down to business of reviewing this web hosting provider:

I do not recommend DreamHost. If you need a good host, use this link to Get 50% Off & a FREE domain at SiteGround.

But if you still want to use them, then use the promo code 2FreeFromSatrap (when checking out) to Get 2 FREE Domains for Life From DreamHost

Since its inception in 1996, DreamHost has positioned itself as a web hosting solution for entrepreneurs and developers. The parent company is New Dream Network, LLC.

The company houses its 3 data centers in downtown LA, Irvine (California) and Ashburn (Virginia), all happen to be inside the US.

In May 2012, Inktank (a professional services and support company for the open source Ceph file system) was spun off DreamHost.

In 2006, the beta version file hosting service, called Files Forever, was born. This allows customers files to be stored “forever” so that these can be later redistributed or sold. For a one-off fee, DH would handle all sales related transactions. However, the company decided to close this service to new members back in Nov 2012, when it launched its cloud computing platform (DreamCompute) and its hosted storage option (DreamObjects).

Issues Along the Way

It has not been an uneventful business growth for the company, as a number of incidents have brought down the company’s servers throughout its existence. E.g. the one in Jul 2006, when 2 power outages at their data center caused huge disturbance to the smooth running of their data center.

A feeble attempt to improve security was prompted in 2007 when the company fell victim to hackers, who reportedly compromised about 700 websites and 3500 FTP accounts.

And in 2008, DH was caught red-handed when it billed some customers for an extra year’s worth of services. Mind you no small change, the additional collection was found out to be in the region of $2.1 million.

The amazing thing is that even with all these screw ups, they never stop this company on their track to become a significant web host in the industry.

As for BBB’s rating and review of DreamHost.com, at the time of writing this review, there was no rating available because

BBB is currently updating its files on all businesses in the Greater Los Angeles area and pending that review, a BBB rating is unavailable.

I will, however, make sure to update this review once rating becomes available.

There was a total of 8 complaints documented against the company. By the way, I just want to point out that you can’t really read too much into BBB’s ratings. For example, the total number of complaints here doesn’t mean this is all the complaints against the company. It’s only complaints by customers who took the time to file it with the BBB. So, in reality, there could be way more or less.

Same thing with the rating, their rating is calculated by considering a few factors that don’t necessarily matter for me and you. One of those is how long the company has been registered with the BBB. I mean, I could care less about how long a company has had a profile there. All I care is whether or not they can provide a reliable web hosting for my websites.

Anyway, I just wanted to mention this since I see a lot of people relying on these ratings as if they are the law of the land.

Don’t get me wrong, it’s always good to check out BBB’s rating of any company, I do this all the time, but take your research one step further. Don’t just rely on them as their rating and reviews don’t quite give you the whole picture. I know many horrible companies who get the high rating from the BBB just because they have been registered there for years or are part of their business accreditation program.

Anyway, back to the review.

Shared, VPS and Dedicated hosting are the major offerings from DreamHost. A recent addition is the new DreamPress service, a service targeted especially at WordPress users.

Dedicated Server hosting – $109 to $249
There are six Dedicated hosting plans:

Dedicated Server hosting plan comes with lots of unlimited features.
Each of these plans includes:

The company unveiled DreamPress only after my sign up, as there was a promotion on shared hosting account on the host’s website at that time. As a result, I did not have a chance to test drive this hosting option.

Unlike most other web hosting companies such as BlueHost (reviewed recently by me) and HostGator who have a 99.9% guarantee, DH actually has a 100% uptime guarantee – but wait till you see what happened to me!

For over 2 straight weeks, I have observed a downtime of 4 hours on my WordPress based sites and reported to them accordingly. If you go by the rule book, you would expect the web host to give a full month of credit, which is the usual situation when a guarantee is not being met.

Now comes the intriguing part, DreamHost took my annual payment and divided that number by 365 days to get to the daily breakdown. Based on my contract, that detail number turned out to be $0.06 for every day. Their standard practice is to credit the customer one day for every hour the concerned sites were down.

As the total downtime in my case lasted a good 8 hours, I would have been credited with a grand total compensation of $0.48, but the customer service executive was “in good mood” that day and I was “fortunate” enough to get $0.50.

Come on, be real! You can’t credit a one day of hosting service for every hour that the site was down. This is no way to make amends but sounds more like rubbing salt to the wound. The policy maker at DH seems to live on another planet.

Most clients reported that they generally have no problem with the support staff. My encounter with them is not really negative as well. In fact, I found them to be well versed on the product knowledge, but I did not have a real chance to test them with really tricky situations.

The criteria for support, in my book, are knowledgeable staff with a right attitude, and the service is on 24/7, so I think we can check off all the boxes.

The wiki and customer support forum hosted by DreamHost collectively represent an excellent source of information. In fact, partly I did not have to lodge too much support requests as some of my resolutions can actually be found on these platforms. 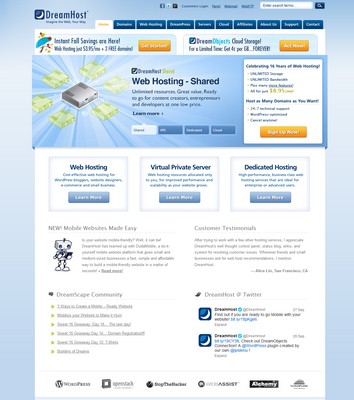 If you live by Cpanel or Plesk, you may be annoyed that neither is available here. In their places is a complete custom-built control panel by the company itself.

Not much complain on the functionality part. Once you are into DreamHost’s control panel, you pretty much find all the stuff on hosting accounts, from billing, Django, ImageMagick and account details to MySQL and email accounts.

As capable as it is, people familiar with Cpanel may feel dejected as that means another re-learning exercise for a brand new administration system, just to perform simple tasks like increasing the PHP memory limit or accessing PHPMyAdmin.

What Else Can You Expect?

Like most other providers, they to have the One-Click Installer software. It allows user quick installation of common packages like WordPress, phpBB, Moodle, Joomla, Drupal and user forums, wikis, eCommerce and blogs.

Regardless of the type of plans, customers are provided a free domain name for a year. The customers have a claim on the domain names and it can be transferred away from DreamHost if desired, anytime.

One can also find free CloudFlare performance and security services at DH. While the support for Jabber (including running your own Jabber server) and Jquery is fairly comprehensive, there is only limited support for Java.

Every plan is covered by a 97-day money back guarantee. At any point during the 97-days period, you can close your account if you get disgruntled with this web host. It takes just a click to get your full refund.

But the company does set some parameters for cancellation. First, you must pay your fees using your credit card and at no point, your account was closed for spamming or breaching any of their T&C. Consistent with any money-back offers, whatever you paid for domain registration would not get into the refund calculation.

DreamHost Reviews by Other Customers

I, of course, had to learn about other people’s experience with DH in order to provide you with a complete picture.

I started by reading DH web hosting reviews on Cnet, then I checked out a few web hosting related forums and blogs like WebHostingTalk and LifeHacker, and that gave me a better perspective on the reliability of DH.

So, combining all of that with my own experience, I think the following would be a fair pros and cons assessment of DH’s hosting services.

DreamHost positions the company as a friendly web hosting provider to help enterprising businessman and developers. But the reality is that this service is by geeks and for geeks. It is among the survivors ( the company founded in 1996) and has been able to stay clear of corporate vultures like Endurance International Group, which always seems to know only one way to grow their business, by swallowing vulnerable and promising web hosts.

To end this review, I would say performance is decent, but do expect support as a bit lax.

If reliability is a key concern, I wouldn’t count on DreamHost to be a capable web host.